OA Sir Tim Besley who was recently awarded a knighthood in the 2018 New Year Honours. Since leaving the school and studying at Oxford, Professor Tim Besley CBE Phillips '79) has gone on to become one of the foremost economists in the country. He served on the  Monetary Policy Committee at the Bank of England between 2006 and 2009, has published research across many areas of the subject, and won numerous awards, with his main focus on developing economies and emerging markets. Tim is now Professor of Economics and Political Science at the London School of Economics, but his own school memories should give hope to boys who aren’t, yet, at the top of the class. 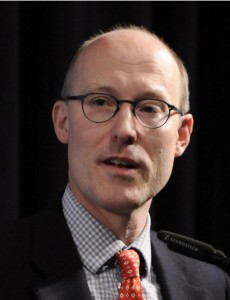 What are your memories of the school and your time here?
There are different phases, actually. Early on I found it somewhat intimidating; when I was there I was in the youngest year for two years running because they switched the intake year after I arrived. And I just found the place quite intimidating: mixing with guys who were older than me, and also the teachers seemed incredibly old and crusty. In that early phase I found the adjustment to senior school quite hard, though I obviously did appreciate that I was at a very good school, I can’t say that I settled in very well initially.
I think, for me, it is the sixth form that gave me most of my happy memories. I’d ground my way to rather a mediocre set of O-levels, as they were then, and found the sixth form to be a very liberating experience.  There was one teacher in particular who stands out in my memory from that time: an economics teacher called Derek Jones. He made it feel like a lot more of a thinking environment, and suddenly you weren’t thinking of education as stuff that you had to do, but stuff that you wanted to do.

What kind of student were you as you came through the school? Were you always very strong academically?
I would say that I was reasonably mediocre up until O-levels. To be fair, I do remember generally being towards the top of the class in exam scores but I never thought of myself as a ‘strong student’; there were always people better than me in every subject, that’s for sure. In retrospect, I think I was just coasting and my O-levels were, well, by modern standards they would be horrific!

What knocked you out of that coasting approach to your studies?
People often complain about A-level specialisation, but I think it worked for me. Having the opportunity to study the subjects that you were really excited about – I did economics and politics, which were two new subjects for me, and two subjects that I was phenomenally excited about. That meant that I was no longer studying as a chore, I was just doing the things that I was interested in.

At that stage, could you have imagined what you would go on to do in your career?
I certainly couldn’t have seen it in the broader sense. I knew that I wanted to study economics in a university setting, and I had started to do well academically. I was developing my own views about things and reading a lot of stuff that wasn’t in the curriculum; I had really developed a substantial interest in the subject. From that point, taking it on to university was clear but I don’t think that I could have imagined anything beyond that.

What was it that got you enjoyed about studying economics?
To this day, what makes me enthusiastic about it is that it combines the right amount of chaos and order. The way we do economics now, and we do get criticised for this, is quite mathematical and structured. So on the one hand it’s a very ordered subject, but on the other hand, as long as you play within the rules, you can pretty much do anything.
The tools of economics are amenable to a whole variety of problems and that’s very exciting. One of my professional interests has been showing how these tools are useful in political science, even recently in areas of social structure, psychology and anthropology.
Economics gives you an incredibly powerful set of tools – I think that’s what really appeals to me.

Would that make you recommend the subject to the boys coming through the school today?
If what they want is something that has got that underlying structure, but to which you can bring lots of other ideas, and if they like analytical thinking about big questions.
If you look out into the world and wonder why it is that a country like Liberia has an income that is a hundred and sixtieth of the income of Switzerland and think that’s an important question; if you really want to think hard about that instead of just reading a newspaper article, then I think it’s the subject for you. You can combine what I think really are some of the world’s biggest questions, while learning the tools to tackle them in a very rigorous way.

What has been the highpoint of your career achievements to date?
There are two sorts of achievements: some involve public recognition, while actually the things that you value as an academic are what you might call peer recognition. I’m a member of the American Academy of Arts and Sciences, which to most people would sound like nothing, but it’s based on a peer-selection process by people you completely respect deciding that you can join that particular club.
It’s nice when you mix with your friends and relatives to say that you’ve got a CBE, or whatever, but those aren’t the things that matter because most of my day is spent dealing with very concrete problems. What my peers think of me as an economist is far more important to me than whether my neighbour is impressed.

You were working at the Bank of England in 2008 and the worst years of the financial crash; what was that like?
That was like nothing I was prepared for from my previous life. I think there was a reasonable assumption that people who were relatively successful academic economists would also become successful policy-makers, but the experience we had and the kind of things we were worrying about, with the dial running down and the economy beginning to look like it was in a very bad place, there’s not a lot that can prepare you for that.
For me it was a formative experience, more akin to what people who’ve fought in a war can remember; you’re suddenly put in a totally unfamiliar situation and realise that you have to be part of a collective solution to the problems that are thrown at you. I’ve learnt a lot from it and knowing that you’ve done something so out of the ordinary will certainly live with me for the rest of my life.

What advice would you have for the boys who are currently at AGS?
I think one of the things that I have been very struck by in life is the fact that people find their own pace at which to develop. I remember boys who would come in at age 11 and, to me, seemed totally brilliant. They would get all the top marks and win all the prizes, and for all I know they’ve gone on to be phenomenally successful in life, good luck to them. But I think different people very clearly develop their skills at different paces; some people won’t succeed until after university.

It’s important that you are comfortable developing at the pace that’s right for you, rather than writing off your chances if you’re not the top kid in the class when you’re 11. Just wait until your opportunity arises, and make sure you grab it when it does.
April 2014

Paul Rogers is the Managing Director of Bain Middle East & Turkey. In 2014, Paul told us about his schooldays at AGS - … More...